“Destination – America” map is the first and only interactive map of Lithuanian heritage sites in America. It will help you to discover these magnificent sites virtually and (hopefully) visit them in reality as well, as the top of these sites holds a great touristic appeal.

What is included in the map?

Beyond the scope of this map (not included in it) are individual graves of non-famous Lithuanians, inaccessible-to-public Lithuanian sites, Lithuanian things that are moved from one place to another, and locations where the sole relation to Lithuania is the participation of some Lithuanians in their history or construction.

• At the beginning, the map shows every Lithuanian site that is marked.
• The menu on the top right allows you to filter some of the sites: either by importance, by category (e.g. only religious or only secular), by the state or by the city.
• On the top right of the map itself, there’s a button that puts the map in full-screen mode.
• When clicked on a Lithuanian site marker, a short description and a picture will appear. Under the picture, you could choose a link to a longer description of the Lithuanian locations in the area.
• On the bottom right of the map, there is an icon of a person who can be dragged on the map to launch Google Street View which helps to see how some place looks in the reality.

The more important and/or interesting the Lithuanian location is, the darker is the color (green, yellow or red). There are 4 categories based on importance.

Additionally, grey markers mark the locations that are not Lithuanian, yet they have a strong relation to Lithuanians or help understand Lithuania.

Moreover, the markers have 12 different images on them based on what is the location, ranging from a Lithuanian church to a Lithuanian monument.

The entire legend of the map:

How do we decide a category?

It depends on what is the type of the site.

Only accessible-to-the-public Lithuanian details are evaluated (that access, however, may be limited: by appointment, on Sundays alone, etc.). If some building has completely inaccessible parts (or parts accessible only to the owners, employees, etc.), they are treated as if they wouldn’t exist.

The graves of famous Lithuanians

Non-surviving small Lithuanian monuments and plaques are not marked. Plaques that include many people, among them one or a few Lithuanians (e.g. lists of donors, lists of all the local veterans of some war) are regularly not marked either.

Names which could be rightfully considered both Lithuanian and foreign (e.g. Polish, Belarusian) are treated as Lithuanian only if the locations are very important or if they were so named due to Lithuanians or, in cases the name has different versions depending on language when the Lithuanian version is used.

Visiting appeal of the Lithuanian site

As the map is made largely for tourists and visitors, the visiting appeal may influence our decision to rate the locations according to categories.

Locations that are on private territory (i.e. somebody’s home or yard) are not marked on the map unless they would be visible from public places or their owners would willingly allow many unrelated interested people in.

What are Lithuanian details

In case a detail could be considered both Lithuanian and non-Lithuanian, it is treated as Lithuanian by us if it was created by Lithuanians or is very important.

We consider only the details that are parts of an immovable property (murals, facade bas-reliefs, etc.) or are almost never moved (e.g. artworks in the permanent museum exhibitions or churches). The things that are moved regularly or could be moved soon are not considered.

One or more Lithuanian sites?

The general principle is one building=one site, even if there are unrelated institutions in that single building (e.g. a Lithuanian museum and a Lithuanian restaurant). In such cases, the predominant purpose is used to select the marking on the map (e.g. a church with a school in its first floor will be marked as a church, yet a school that has a chapel will be marked as a school).

Moreover, if multiple buildings form a single complex built at a single time and for a single use, it is also marked a single site (e.g. a monument consisting of three crosses won’t be marked as three separate monuments, for example).

However, if there is one Lithuanian location right next to other that has a different use and/or building time, it could be marked as a separate Lithuanian site.

If several Lithuanian-named streets are nearby and they were named together, they may be shown on the map as a single object.

What if the use of building has changed?

On the map, each building is marked down by the type (and called by the name) of the final times that warrant its inclusion in the map. For example, a Lithuanian church converted into (non-Lithuanian) apartments would still be marked as a church.

What were the routes of the expeditions which created the map?

The routes are on this postcard that was given as a souvenir to those who helped the 2021 expedition:

Map of US Lithuanian places 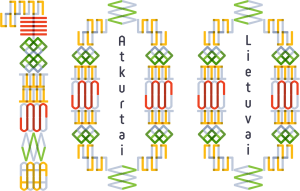